“Merry Christmas Ma! Here’s a big puddle of pee for you!”

When writing about why people should not get or give gift dogs at Christmas time I mentioned, among other things, that there is simply too much going on that will just stress out an already stressed dog. I think that what culprit behind the little Christmas surprise.

We had company stay over for three days, which put a big monkey wrench in the groove of our fine-tuned household machine.  That, combined with a haphazard walking and playing schedule,  Christmas goodies (more than her little doggy begging senses could handle), and all the noise, it seems like her little pee episode was a classic case of potty training regression. 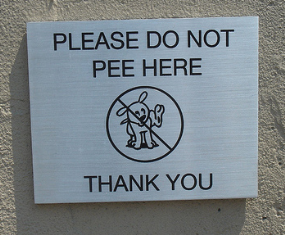 She peed in the house three or four times (that I know of) during those few days of chaos. I whipped out the carpet shampooer a few times, which only added to the stress. I can smell a pee accident from a mile away, so there was no way I could let it wait until everyone was gone. I guess Phoebe took offense to me removing her fragrant gift and peed right where I had just cleaned. Uhhgh! Another round of carpet shampooing and I thought I was in the clear.

The next day I woke up to the fine odor of dried urine in the living room. Those are the tricky buggers. I can never seem to find the source.  Not wanting the family to think I was totally nuts, I waited until dark and when everyone was engrossed in a TV show, I went on a hunt.

Yeah. I admit it. I was on my hands and knees sniffing the room from side to the other until I found the offending area.  A quick zap of pee-killer and I moved on – sniff, sniff, sniff – I found another one, and then another. What the heck?  She must have been having a party in there or something.  When I was convinced I had found all the areas, I shampooed the carpets again. It smelled clean in the house once again – for a day.

It was time to pull out the super sensitive dog pee sensor (my nose) again. It was another nighttime recon of floor sniffing. This time, Phoebe came to help. Gee. That was awful nice of her; if anyone could sniff out the perfect spot it would be her. We found it; I cleaned it, and now I hope that is the last of it.

The house is quiet again, and after three days the temporary potty training regression has stopped. Phoebe is getting her daily walk on schedule, playtime in the yard, and dinner on time. Isn’t it funny how the little things can really bust the groove of these little pups?