Taking the Phoebe Dog to the Beach for the First Time

We did something new and amazing well, amazing for us. We took Phoebe to a beach.

I can’t remember the last time I went to the beach. There is something about sitting in traffic, spending hours looking for a place to park, and worming my way through a crowd of people all in an attempt to find three square feet of beach real estate that just doesn’t do it for me. However, since we were on vacation nearly 500 miles from home we thought perhaps we might find some coastline that was better than what we have near home.

With a bit of online searching, we found a place that has twenty-two dog friendly beaches in a span of 10 miles or so. Three of the beaches allow off-leash dogs, leaving us with nineteen others to choose from. They were even more enticing because they were half way between where we were staying and home. All we had to do was find a dog friendly hotel (an easy task) and voila! We had some great beach options, we got to break the drive home into two pieces and we got to extend our vacation one more day.

We wanted to get to the beach early, but we wound up pissing the day away sitting in traffic and getting settled in the hotel. We finally found got to the beach about an hour before sunset. Considering that Phoebe adverse to change and trying new things, I was fully prepared to walk up to the beach and then turn around and leave. Surprise, surprise, Phoebe wandered on the beach without any trepidation. She quickly learned that it wasn’t a good idea to put her nose too close to the ground while sniffing her way across the sand. 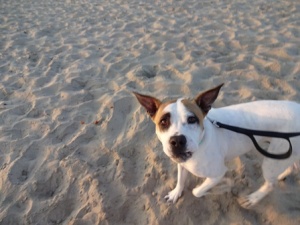 I noticed two dogs off-leash, but they were too busy chasing balls that their owners were tossing in the ocean to even think of checking out other dogs. Phoebe watched them for a minute or two and then moved on. Phoebe definitely is not a water baby. The odds of her romping through the waves chasing balls is somewhere between little and none. One summer we bought her a baby swimming pool, hoping she would jump in and cool off. She totally avoided the whole scene. I tried coaxing her in with toys and treats, but she would have nothing to do with it. In fact, she sat and would sit and wait until the toy or floating treat was in reach and then snag it and ran off. With that in mind, I was happy that she allowed us to walk towards the water without freaking out at the sight and sound of the first wave. At this point I thought there was a 50-50 chance that I might get her to put foot in the edge of the Pacific Ocean.

I contemplated the best approach for getting Phoebe in the water. I certainly could not force her and on the other hand I could not make a big deal out of it, as if we were dealing with a big boogie man. Still, the fact remained that one wrong move could leave her afraid and/or disliking the beach for a very long time. I decided that the best approach was to not plan approach. 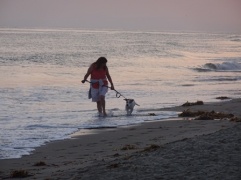 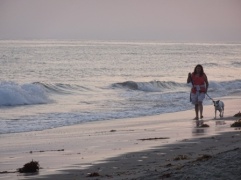 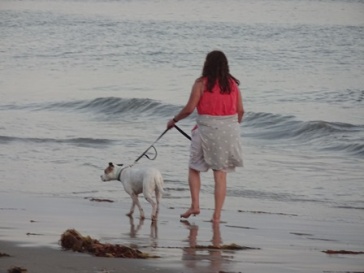 I took Phoebe for a walk on the beach and headed towards some wet sand. The tide came rolling in and Phoebe did a great job of side stepping and backing away from every curve of the incoming tide. It seemed as if her reaction was the result of unfamiliarity more than fear. For some weird reason, Phoebe seems to be more adventurous when running so I got the bright idea to take her for a jog and eventually jog her right through some shallow water.

We started on the dry sand and went back and forth, getting closer to the water each time. Eventually, we went right through the water – Victory! Phoebe got her feet in the water and I got to stop jogging. We walked back and forth a few times before we got hit with the tail end of a breaking wave. I expected Phoebe to run for the hills, but she shook it off both literally and figuratively. She wasn’t ready for a repeat performance, but she was content walking in the water. The sun was setting and the tide was getting higher, so I quit while we were ahead.

As we were leaving the beach I realized that I did not arrive fully prepared. We had a partially wet sandy dog on our hands. The beachside showers were broken and the closest thing I had was a 16 oz. bottle full of water. I made the best of it by pouring some on her paws to get the salt off, and then dribbled a bit down each of her legs. I tried to get some of the sand off, but as we all know wet sand is not too forgiving. I didn’t want to rub too much so I had to use a time tested trick: let the sand dry. Next time I am going to take a few jugs of tap water so I can give her a good rinse. It leaves me wondering how to clean a dog that is soaking wet with salt water and covered head to toe in sand. At first I cringed when Phoebe started to lick her legs. Then I chilled out. She ate candles for crying out loud. In comparison, a little bit of sand was not going to make a dent.