Emotional Support Dogs – How One Helped a PTSD Survivor

With Veteran’s Day upon us, it seems like a good time to talk about our big plans of grooming Phoebe to be a therapy dog. We envisioned taking her to the Veteran’s Hospital to visit patients. It sounded like a great plan at the time, but now that her personality is shining, it seems wise to wait. She may not be roaming the halls of the Veteran’s Hospital, and that is all right. Instead of helping many, she is serving a higher purpose of changing the life of one veteran – the one at home.

Phoebe is young and exuberant. She loves people and loves attention; she simply is not tempered enough to make her way to a hospital for visits. It turns out to be a blessing in disguise. By letting her be herself, a bouncy, goofy, loving Phoebe, she has drastically changed the life of a veteran with severe Post Traumatic Stress Disorder (PTSD). Unplanned and unknowingly, Phoebe has earned the label of being an Emotional Support Dog and impacting much more than originally intended.

Living with and Emotional Support Dog

Many Veteran groups offer dogs to veteran’s with severe PTSD. We lucked out and found the perfect emotional support dog without having to wait for a Veteran support group to assign one. Keep in mind, when I adopted Phoebe, she was my gal. I had no clue that she would, by her very nature, help someone with severe PTSD.

There is a difference between Service, Therapy Dogs and Emotional Support Dogs and I will get into that in my next post.

He has struggled for many years with depression and anger. He was afraid to leave the house, was hyper vigilant at night, and could not sleep because of nightmares. He had to sleep with the light on so he would could assure himself that he was home and not at war. With all this going on we got to the point where we had very little to say to each other. Then along came Phoebe.

There weren’t any overnight miracles, but comparing a year ago to today, our quality of life has drastically changed. 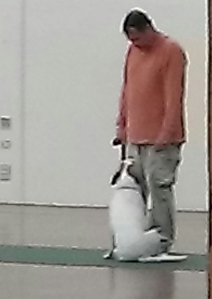 For the first time in a long time we have a common goal – taking care of and training Phoebe. That got us talking and we expanded from there. Did a dog do this? No. However, a mutual desire to care for her got the ball rolling. Conversations about Phoebe started to turn into conversations about life.

Strength to Get Out of Bed

Once he acclimated to having a dog around, and got a few doses of Phoebe’s unconditional love, our Veteran started dragging himself out of bed to play with Phoebe in the yard. Her goofy antics got him laughing (something that was absent around here for a long time). Wow! From that point forward, our lives started to change.

In spite of his agoraphobia, my husband starting taking Phoebe for walks. Whoa! They were short at first, but slowly increased. Now he puts her in the car and takes her to the park and to get her nails trimmed. His desire to care for Phoebe was the catalyst to get over many fears. Now, he runs errands and does all the grocery shopping.

He and I discussed how a dog could change his life. He confirmed what I thought – Phoebe gave him a purpose in life and the strength to move forward.

Is it possible for one little dog to foster these significant changes? A resounding yes!

Would any dog fill this role? I do not know.

That is another thing I  will delve further into in my next post.

I asked my husband if he would be willing to write about the way that Phoebe changed his life. He was a willing participant and gave me the following statement.

“Phoebe has changed the way I look at life. I have no more violent dreams or impulses..

She has given me the courage to leave my home. No more wandering around my neighborhood in the dark waiting for an insurgent or the enemy to appear.

Because of her I now sleep through the night and have little to no nightmares.

Because of her I now care about life”