Dog Food – Some are Worse than a Corny Joke

When I was a child, the family dogs were fed top of the line food. Not just any old food; they were fed Gravy Train! How could we even imagine giving our beautiful German Shepherd and our prancing purebred Poodle anything but the best? They would gobble down that bowl full of little saucy nuggets like there was no tomorrow. They were a lucky pair!

When I told my friend that I had adopted Phoebe, she sent me an email listing all the must-haves for a new puppy. At the top of the list was food. Good food. Make that great food.

Before I could offer great food, I had to understand what the heck that was. It has been a l-o-n-g time since I owned a dog. At the time we did not have huge pet stores with aisles and aisles of food to choose from. We simply grabbed whatever they had at the grocery store and threw in a few table scraps as a treat. I would have never imagined that I would be sitting here now agonizing over providing a healthy diet. 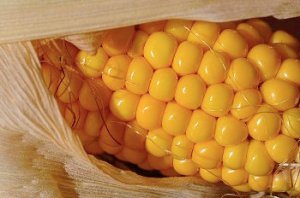 As I started researching doggie nutrition, the first common factor I noticed was a perceived dislike of dog foods containing grain. For some reason it reminded of a book I read several years back, The Omnivore’s Dilemma: A Natural History of Four Meals by Michael Pollan. The basic premise of the book was to describe the food chain that leads to the meals we eat.  It sets the stage by describing the exorbitant amount of corn that is produced in this country – far more than what can be used  – and how the overabundance trickles down and ends up in our stomachs in more ways than I can count.  It is truly an eye opener as to how the food industry exploits the overabundance of corn almost to an extreme.

I am not on an anti-corn campaign or trying to raise a food philosophy debate. I just find it real interesting to see where and how corn rears its little head (or ears).  The New York review of Books, June 28, 2007 by Tim Flannery summarizes the point made in the Omnivore’s Dilemma quite well,

“At the base of the national food chain is a single species of grass–corn–and its growth, processing, and sale constitute a titanic industry which is focused on increasing profits rather than health and well-being.”

Along the same lines, an article on Smithsonian.com points out that, 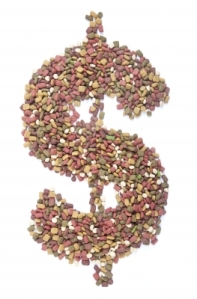 “There are some 45,000 items in the average American supermarket, and more than a quarter of them contain corn. At the same time, the food industry has done a good job of persuading us that the 45,000 different items or SKUs (stock keeping units) represent genuine variety rather than the clever rearrangements of molecules extracted from the same plant.”

If there is scuttlebutt about the role of corn in the human diet, I could only imagine the impact it has on the dog food industry. I did some more research and then just for kicks I took a trip down memory lane and looked up the childhood doggie staple food: Gravy Train.

Gravy Train is now made by Del Monte Foods and their web site proudly states,

“If there is one thing dogs love it’s rich, beefy gravy. So why serve them anything but Gravy Train® dog food? It has a 50-year heritage dog owners trust, and a rich, savory taste dogs are crazy about. Just add warm water and serve up a nourishing meal with the delicious gravy dogs crave. It also tastes great dry. Gravy Train dog food has also earned praise for being the only national dog food with bilingual (English/Spanish) packaging.”

I managed to find an ingredient label and Del Monte was true to their word; the label was in Spanish. I am not bilingual, but it isn’t hard to decipher the first ingredient on the list “Maiz” – Corn.

It was time for a crash course in dog nutrition.