How Long Are The Green Tooth Cleaners Supposed Last?

I have a question.

A little backdrop – my hairdresser / friend told me her dogs had to have surgery. I asked why, and she whipped out pictures of the horrendous state of her poor dogs’ teeth (jaw deterioration, teeth rotten to the core, etc.). One of dogs lost all his front teeth, so his little tongue will always stick out. The other lost his back teeth. Neither will ever be able to eat hard food again.

That left me contemplating the care of Phoebe’s teeth. We do brush them, but I would be lying if I said I did it every day (more like once a month). After seeing what happened to my friend’s dog, I thought I would buy some of those Greenie tooth cleaners I have heard so much about to fill in the space between brushing 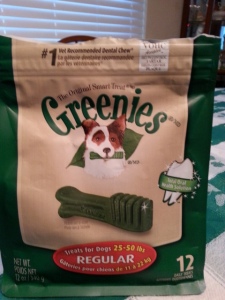 My question is: how long are they supposed to last?

Are dogs supposed to just chew on them like a bone, or are a few chews good enough?

Phoebe basically eats them in three bites. She does a little chewing so can swallow them. For some reason, I do not think that the expectation it to gobble them down, but thought I would ask.

If anyone can provide some input, I would appreciate it.