Surgery Collar – My Review of the Contech Pro Collar

When Phoebe hurt her leg, the thought of wearing a cone did not cross my mind. After a few days, she started to lick the areas where the splint met her ‘elbow’ joint. It did not take long for a hot spot to rear its ugly little head.

Once a hot spot appeared, the thought of a cone crossed my mind, but I was still hoping I would not need to put one on her.

I put antiseptic on the sore and tried some Neosporin (triple antibiotic ointment). For some reason, Phoebe thought it was a delicacy and tried to lick it off the gauze before it even got near her skin. I am not surprised; she is a dog who likes to eat unscented candles, after all. Nothing surprises me.

After fumbling and bumbling and getting the ointment on her sores, which were under the splint, she immediately went to work trying to chew off the splint. That was when I was forced to accept that Phoebe needed an Elizabethan collar . Yes. She was going to get the “cone of shame.”

Up until the time I entered the pet store, I believed the big plastic cone was the only option. I was pleasantly surprised to find that several seemingly more comfortable options were available. Options are good, except when the Libra in me kicks in. After nearly an hour of agonizing self-debate, I chose the Contech Pro Collar.

The Contech collar suits Phoebe’s needs perfectly. I will admit, however, that it is not the best choice for all scenarios. I made a list of pros and cons.to explain why.

The Pro Collar lets you choose between using a Velcro attachment (provided), and using your dog’s regular collar. I opted to use Phoebe’s regular collar because it makes it easy to snap on and snap off. The cone was easy to adjust and provides an option to adjust how wide you want it to be.

It has reflective trim, though I am not sure why. I don’t think I would take Phoebe out when she is at such a disadvantage.

The front folds backs, allowing Phoebe to have a bit of peripheral vision. This fold back feature also comes in handy at feeding time. I simply rotate the collar so Phoebe can get to her food and rotate it back when she is done. 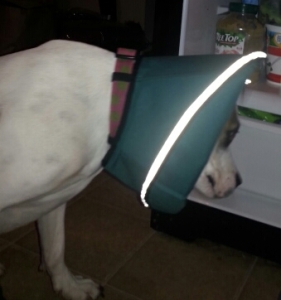 With the exception of the front, the seams are reinforced. Basically, the same thing one would find in a corset.

Despite 24 x 7 use for the past week and a half, the sturdy side seams have not bent at all.

The depth is enough to keep her away from her sore area, without banging into walls

The best feature to me is that it allows her to lie down comfortably without compromising its purpose. 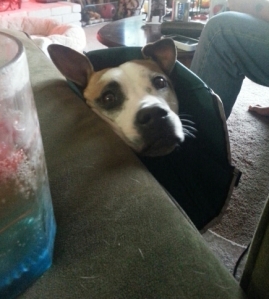 The limited visibility leaves her open to being easily startled. After scaring the heck out of her, I quickly learned to say something as I approach and let he see me before I pet her.

Velcro dog –Phoebe was lying on a throw rug, and when she stood up, the rug was securely attached to the Velcro on the cone. It cracked me up when I saw her walking around, dragging the rug behind her until it finally broke loose.

Along the same line – If you have furniture or bedding that is prone to snagging, you may want to keep your dog away or put the item away until the cone is gone.

This particular cone does not keep the dog away from their lower body. Phoebe can still grab her rear foot and do her doggie
‘cleaning’. I definitely do not recommend this if you are trying to keep your dog away from anything below the hip line.

All in all, I am pleased with this collar.
Let me know if you have any questions.