When a Dog Loses Its Squirrel

We have two huge palm trees in our back yard that used to house a great source of fun for Phoebe. 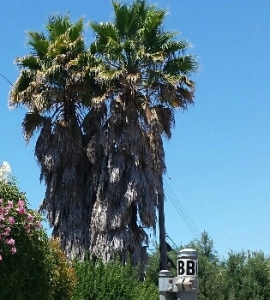 I don’t know how much you know about palm trees, so I offer a little trivia: for every new frond that grows, another dies. We inherited trees that obviously had not been cleaned for many years. The skirt of dead fronds extended at least 15 – 20 feet from the top of the tree. It was just enough to create a perfect habitat for squirrels, rats and who knows what else, but too high to do anything about it.

I do not think it comes as a surprise that dogs are prey driven. Even in suburbia they have that natural inclination to hunt.  I have heard arguments on both sides regarding allowing or nixing prey drive activity. Some say we should curb prey-driven activities, others say it is fine, if not fun. I fall in the latter category.

Phoebe has no interest in hunting domesticated animals such as cats. If one hops up on the fence, or if we see one while out on a walk she acts as if they do not exist.

When it comes to animals in the wild, she tried hunting lizards until she actually succeeded in catching one. She spit it out and has left the lizards alone ever since. She does not try to catch the baby toads that frolic in the grass or the occasional garter snake. Do you think dogs know the difference between mammal and reptile? She does stare and bark at my turtle, but I think it is because they share the same space.  That leaves birds, rats and squirrels.

If Phoebe sees a bird she will try to chase it, but doesn’t put an all-out effort in to  catching them. She tried at first, but they perch themselves on phone lines 30 feet above ground. I guess a few attempts at trying to jump 30 feet to catch one did her in. Now she just runs and scares them off.  As for rats – well, I never see them during the day (thank goodness), but I saw signs of them living in the tree  and Phoebe seemed to scope them out at night, but never caught one. That leaves squirrels.

She would lie on the lawn staring at the palm trees just waiting for something to rustle in the depths of the palm skirt. Upon seeing and hearing that signal she went into instant little hunter mode. Suddenly, she morphed from a Pit bull into a Pointer, with her paw raised like a dainty little gal, and her tail straight out. Next she would go into stealth mode as she slowly worked her way towards the trees. The squirrel would pop out and Wham! Game on!

Phoebe virtually flew trying to catch the ball of fuzz as it scurried over to the neighbor’s yard. Even with a running start, Phoebe cannot sail over an eight foot fence, and as much as she would like to, she is not capable of climbing trees.

Recently, the landlord cleaned the palm trees,  thus evicting the rats and squirrels and leaving Phoebe with nothing to hunt at home. I will admit, that I kind of miss watching the little huntress; it was good for a chuckle.

Maybe I will buy some fake squirrels and hang them from the trees, though I doubt she will go for it.

The million dollar question here is: why do dogs l-o-v-e to chase squirrels?.