That is exactly what my dad is going to say when, or if, he finds out that Phoebe went on a little gopher hunt while we were at his house the other day.

The last time we went to visit my dad Phoebe found a gopher hole that seemed to intrigue her. She started to nose around it and I thought it would be kind of cool if she could destroy the stupid gopher and be the heroine of the day, but my dad had other plans. He didn’t want her tearing up his lawn. Oh well.

When we went to visit the other day that gopher hole was the furthest thing from my mind. Then again, I am not a dog. It turns out that Phoebe had not forgotten at all. One minute we were just hanging out on the patio and Phoebe was wandered about, and the next minute all hell broke loose.  We glanced over to see what she was up to and instead of seeing her prancing around the yard all we saw was dog butt and dirt flying. Damn! 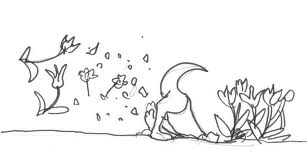 Phoebe’s face was submerged in mud and what had once been a small gopher hole was now a hole the size of a basketball. Oh boy! When the grass started flying panic set in – thank goodness my father was still in the house – we rushed over to stop the frenzy, but not soon enough.

Phoebe was acting like a wild boar, rooting around and annihilating a good three-foot area of lawn. What to do? Ah! let’s start shoveling mud back into the hole with our bare hands and then act as if it never happened. After shoving gobs of mud into the gaping hole it still looked like crap. We frantically started tossing bits of grass on  top the muddy mess in a feeble attempt to hide the damage. Just when we thought we were making progress my dad came outside. Double Damn!

We tried to act all cool (as if hanging out in the middle of a wet lawn is normal) and for one delusional second I thought we had a chance. That is until I looked down and saw Phoebe staring at my dad, panting heavily, with her face covered in mud and bits of grass stuck on her nose. Paint in two adults with mud covered hands and shoes, and you have a picture that screams Guilty!

Knowing I was busted, I did the next best thing, I tried to downplay the situation. I casually told my dad that Phoebe dug up a little bit of grass. He seemed to take the news pretty well and told me to just put it back and stomp it. He must have envisioned something akin to a golf divot. Hey! I wasn’t going to elaborate. I stomped my foot on a small area of lawn and walked off.

I hope that gopher comes back and has a party on the lawn, then I can blame it all on him. Otherwise I am going to have to fess up sooner or later. Damn dog!