We went to the vet. Phoebe’s vitals and lungs sounded good, but she was a bit pink on her belly and her ears were filthy! In addition to all the gunk, she also had some scabs in her ears, and a few tiny ones on her body. I told the vet that I had signed up for insurance and was hoping there were no pre-existing conditions (wink wink).

Phoebe had only been with me for three days, so other than the pinkness, her behavior seemed normal and I did not notice any apparent signs of illness (i.e., no vomiting, diarrhea, lack of appetite and such). The vet performed a test for heart worms (it was negative) and took a wait-and-see approach on the pinkness. I was supposed to return in two weeks if the pinkness did not go away or if Phoebe broke out in a rash.

We were sent home with instructions to clean her ears every other day for a week, and then once every one or two weeks for maintenance. 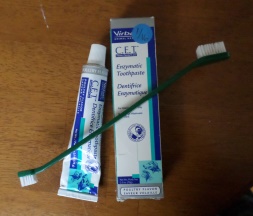 We were also supposed to start priming Phoebe for a lifetime of healthy teeth by getting her used to having her teeth brushed. We were told to just focus on one tooth and start expanding to other teeth when Phoebe got used to it. The vet also recommended that we get in the habit of checking Phoebe’s paws and mouth regularly – not  really looking for anything in particular – it was primarily to get her used to being checked head-to-tail without making a fuss.

We walked out of the vet’s office with the basics in-hand. I was happy! Other than the pinkness, it seemed like we were in the clear. Later, I would learn that my excitement was premature.

It is pretty obvious that buying supplies from sources other than the vet is cheaper. However, it is not wise to run off on your own and buy these items before seeing a vet. This is especially true for heart worms. You need to make sure your dog’s heart worm test is negative before putting them on prophylactics. Giving preventive medication to a dog who is already infected can be harmful, or fatal.

That is a big chunk of change! It was also just the beginning.

I should have paid more attention to the paragraph on the adoption release forms about the potential of rescue dogs being exposed to diseases that may not show symptoms for several weeks. Phoebe’s symptoms started a few days after that first vet visit.