Rescue shelters love the animals they care for and put in many long days and nights fighting the uphill battle of finding homes for dogs that would otherwise be euthanized.

The rescue agency that took care of Phoebe made sure she was spayed, got all her vaccinations, had her micro-chipped, and gave her lots of love. Granted, they did not do all the hands on medical work, but they made sure it was done. I am amazed by the number of people and organizations that contribute to saving the life of a dog.

I got a glimpse into the work and commitment  involved in finding homes for rescue dogs the day that I went to pick up Phoebe. Though, I am sure I only saw the tip of the iceberg.

Every weekend the rescue group who cared for Phoebe for nearly three months (Pawsitive Connections) packs crates, dogs, tables, food, water, leashes and lots of love into a truck and drives to whatever pet store is on the schedule for the weekend. Then they then unload, set everything up and spend the day trying to find good homes for the dogs that they have committed to save.

The pet store where Phoebe found me was three hours from Pawsitive Connections’ home base. They arrived promptly at 10am and Phoebe was the first one off the truck – what a beauty! After I attached her brand new collar and put her on a leash it was time to officially sign the adoption papers, get all of her paperwork and take her home.

I already knew that Phoebe had been a stray, but the paperwork was the first tangible piece of information I had. Even better, when I read them carefully, a story emerged.

According to Phoebe’s Kennel Card, she was a “Stray Hold” who was placed in the Tulare Animal Services Facility‘s General Population, which according to their site is a 50-kennel facility. Phoebe (then nameless) was placed there on 04/26/2013. Her stats:

On her first day at Tulare Animal Services she received one vaccine that, generally speaking, protects against parvo, hepatitis, respiratory disease, para-influenza, and distemper. She received another one to protect against bordatella / “kennel cough.”

Pawsitive Connections picked her up on 05/06/2013 (one day before her ‘available’ date). They named her “Rory” and deemed her to be a Mastiff / Shepherd / Terrier mix. She was initially listed as a Pit cross / Shepherd, but someone scribbled it out and changed it to Mastiff. That is the only thing I was not pleased with, but it certainly does not discount their mission and hard work. Phoebe is about as Mastiff as my right foot, but I guess the word “pit” scares people off. I get it. It is sad, but I will save my soap-box speech for another day.

On 06/05/2013 Phoebe received her rabies vaccine and was spayed at the H.O.P.E. Animal Foundation Clinic. H.O.P.E. stands for “Halt Overpopulation with Prevention and Education.” According to their site, “The community, solely with donations, has built [their] foundation.” Their contribution to rescue dogs is to prevent the overpopulation that leads to the vast number of unwanted dogs in shelters who are often euthanized.

After Phoebe was spayed, Pawsitive Connection cared for her until she recovered. This is just another example of the love I mention in the first paragraph.

Phoebe’s stats at the time of her spaying and rabies vaccination:

I am guessing she spent about 2 weeks in recovery (06/19/2013 +/) and then spent the rest of her time hanging with her kennel mates and being loved during the week, and then traveling in a big truck to a pet store each weekend  where she was put on display for adoption. That is seven weekends of road trips before she reeled me in, and two more weeks hanging out until I could bring her home.

By the time I brought Phebe home, she had a fair amount of time and miles under her belt. 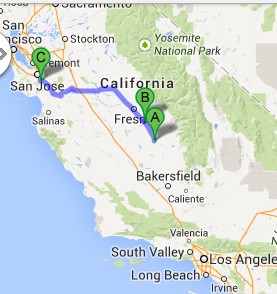 Finally, my gal was standing on the doorstep of my house, two hundred miles away from where her life started. She was about to enter the place she can call home forever.